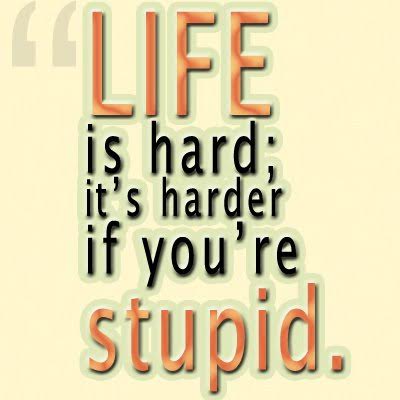 I recently heard a news story that perked my ears.  In this story, there was a man who had committed a crime and got caught very easily.  The crime wasn’t very interesting.  I don’t even remember what he did.  All I remember is in order to commit this crime, he gave his personal information to the victim.  This made catching him easier than catching a heavy footed preschooler who is supposed to be in bed.  The thing that really caught my attention was what the sheriff said regarding this case.  He was blunt and to the point when he said, “Life is hard.  It’s even harder when you’re stupid.”

How many times have you heard the old Proverb, “Train up your child…and they will not depart from it.”  Most believing parent’s of unsaved grown children hold onto this verse for dear life.  Many think it means that no matter how awful of a heathen there child is, eventually they will turn back to Jesus.  I don’t believe that this is what that verse means.  I believe that if we teach them, they will have the knowledge to face anything, even if they don’t know Jesus.  Let me try to break this down.

We all know the saying, “Knowledge is power.”  I have observed that many Christian homes try to avoid giving the “wrong” kind of knowledge to their kids.  There are just some things you don’t talk about.  Things like sex, death, money, divorce, and even God  Many parents’s either don’t know how to talk to their kids about these, or get too uncomfortable that they avoid these topics altogether.  The problem with this philosophy is that just because you don’t talk about it doesn’t mean that your kids aren’t learning about it.

I was recently in one of our church programs when a group of girls began to talk about “THE VIDEO” they saw in health class at school that day.  You all know what video!  The teacher, knowing that not all the girls saw it or had even had any resemblance of the “Talk” with their parent’s quickly diverted the conversation.  This is just one example of places that your kids are learning about these topics.  Here are a few other places: school, the playground, friends houses, the internet, tv, movies, music, etc.  You see the question is not when should they learn?  But, how are they already learning it?  And, why are they not learning it in the godliest way possible?

There is a great resource out called Talk Now And Later: How to Lead Kids Through Life’s Tough Topics by Brian Dollar.  I highly recommend it no matter what stage of life your kids are at.  In his book Brian says, “We can prepare them by talking openly—and age-appropriately—so they’re ready when the time comes to process these events.”  We need to give our kids knowledge of healthy godly ways to deal with the very topics that most of us try to avoid so they can deal with it.   I would rather my kids learn from me than from their friends.  I want to train them and empower them because, “Life is hard.  It’s even harder when your stupid.”

This month is a history making month.  Knowing that our lives are, in fact, very short when compared to eternity, we have launched an effort titled “Mere Shadows.”  The entire concept is born out of First Chronicles chapter 29 where David responds to the realization he will not be able to build the Temple, David commits to raising money so Solomon, his son, can build it.

One of King Davids driving forces was the fact that our lives are mere shadows (this verbiage is derived from The Message version).  He knew what he did today would change tomorrow.  That is exactly what this campaign is all about, changing lives today and tomorrow.

This church has been a strong missions church, and a strong evangelistic church for many, many years.  Only eternity will truly be able to testify to how many millions of lives have been changed by the Gospel message because of the sacrifice of men and woman who went before us.  We stand tall only because so many stooped so low in humility and self-sacrifice to build what we are standing on.  Now it’s our turn!

Our building is not the church, we know that, but our building reflects the church and our reflection needs to be polished up a bit.  We are in need of renovations, and that is why we hired SJCF architecture firm to help us develop a master plan for renovation.  I would rather call it the Masters Plan, for our church building, because I do believe He has brought us to this point.

The entire month of April is committed to Mere Shadows.  April 3rd we Looked Back to what God has done, April 10th we are looking up to what He is doing, April 17th we look out, and we will wrap things up on April 24th as we look forward to what He wants to do.

Please be in prayer about how God would like you involved with this effort.  Also, try to make every service in April.  These are historical days we are living.  This church will be a light to this community for years after we are gone, but in the next few weeks, (in some ways) we will help determine how bright it will shine.

To the Glory of God

Thanks for looking into our church. When you come and worship with us this Sunday, you will find a warm community of believers, passionate worship, and exciting preaching of God’s word. Finding a place to call home is very important to you and your family. The bible says in Psalm 92:13 (NASB):

“Planted in the house of the LORD, they will flourish in the courts of our God”

We would love to be a part of seeing you and your family flourish with us, in Christ!